SELF IN BUDDHISM by Jimmy Petruzzi 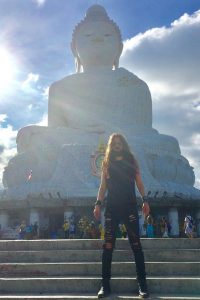 Addressing the misconception about existence, value and meaning of the self as a separate entity plays an important part in Buddhist teachings. Also, these interpretations have attracted some debate in modern psychology as it can have a profound impact on our conceptualization of identity and the psychological problems that may arise from attempts to construct it.

One of the most fundamental doctrines of Buddhism is that the self is illusory and that concept has to be explored and experienced in order to be liberated from suffering. The widely accepted view is that it is only conventionally true that we are persons, but our perception about ourself does not correspond with the ultimate truth of reality. Through experience of the Five Aggregates—body, feelings, perceptions, volitions and consciousness—we conclude that a separate self has to exist that retains identity over time, is permanent and enduring, and has controlling powers. However, the basic philosophical argument is that none of the Five Aggregates, representing all psychophysical elements, are permanent, therefore there is no [real separate] self.

However, the Buddha’s claim that the self does not exist is often misinterpreted or misrepresented as many of the current understandings and interpretations of the Buddha’s conception of the self is based on retrospective analyses. In fact, instead of teaching that nothing exists—that there is no existence—the Buddha teaches that beings and phenomena have no intrinsic existence. The same applies to the self.

Therefore, there is no blanket denial of the self in the Buddha’s teachings and scriptures. As such, the concept of Anattā, the non-self or absence of a separate self, attempts to define a line between the “self” and “others”, which can be thought to contain an element of self-identification and clinging, two factors that the Buddha identifies as a source of suffering and stress.

The concept of self was thought to be enveloped by immeasurable defects of mind, morality and character, which are impermanent and insubstantial. Simply, it means “Now you see it; now you don’t”. Therefore, the concept of the self in Buddhism is about the absence of static entity. The self is constructed in response to external factors and experiences, which continually change. So, the self can really be seen as a “stream of oneself” instead of a finite entity. In other words, one has no inherent existence that exists independently, but is merely the results of energy or matter orientation that evolves continuously in response to stresses from the environment. Instead of clinging to a concept of the self that is fluid and deceiving, the Buddha teaches to realize that there is no permanent individual self; and that this realization will contribute to the end of suffering and stress.

In this respect, the philosophy of Buddhism is argued to be committed to empirical scrutiny and the pursuit of knowledge in favour of speculation. The doctrine of the no-self rests on two main arguments, namely the argument from impermanence and the argument from control.

The first argument is based on the premises that a person is no more than the Five Aggregates (exhaustiveness claim), that the aggregates are not permanent, and that a self has to be permanent. The hypothesis therefore leads to the conclusion that there is no self. However, the main contested question, even today, is whether there is some self beyond the five skandhas, which remains largely denied.

In addition to permanence and control, the criteria for selfhood also includes the condition of numerical identity over time. Observations of bodily and mental states reveal that our body, feelings, perceptions,volitions and consciousness constantly change. Therefore this doctrine of momentariness that at every moment, the five skandhas arise, are destroyed and are succeeded by other numerically distinct (if similar) skandhas, supports the argument of no-self.

Secondly, and similarly, if there was a self, we would be able to alter aspects of it, or to control function in parts of it. However, this presumed executive function of the self is undermined by the principle of irreflexivity. This principle is based on the thesis that a whole is grounded on or depends entirely on its parts, in this case the five skandhas. But irreflexivity holds that no things are grounded in or can operate on themselves. It follows that “if the self performed the executive function, it could perform that function on other parts of the person, but not on itself. This means that I could never find myself dissatisfied with and wanting to change myself, which in turn means that any part of me that I can find myself wanting to change could not be myself” (Siderits, 2007, p.47).

However, a counterargument can also be made here. Knowledge and suffering are key elements in the Buddhist philosophy that have to be explored to achieve liberation. Arguably, these concepts imply the existence of a subject to which they apply. The capacity to analyse and observe change, for instance, is coherent with the presence of a self, however fluid and fleeting in any one state.

What we experience, rather, is a continuous flow of perceptions that replace one another in rapid succession. “When I enter most intimately into what I call myself,” says Hume, “I always stumble on some particular perception or other, of heat or cold, light or shade, love or hatred, pain or pleasure. I never catch myself at any time without a perception, and never can observe anything but the perception.” Within the mind, he continues, these perceptions “successively make their appearance; pass, re-pass, glide away, and mingle in an infinite variety of postures and situations” (Selby-Bigge, 1965, p. 253). It can be seen to simply mean that there is never simplicity in the mind nor the same identity at two different times.

Therefore, our notion of the self is constantly shaped by successive perceptions and interpretations of thoughts, feelings, sensations and other mental experiences. Instead of a persisting, invariable and interrupted personal identity, we contain much more diversity than our concept of a permanent, controlling, fictitious self.

Evolutionary psychologists have largely found appeal in the idea that there is not one ultimate controlling self, a kind of CEO of the mind. Most behaviours are related to thoughts and feelings that arise outside of our awareness, arguably to serve some Darwinian purpose without our intentional intervention or control. Instead, our conscious effort is to rationalize and attach some meaning to these inner experiences, using objective interpretations that are far from factual and complete.

As such, our identity is the sum of our memories, which is therefore fluid, contextual and sometimes confabulated. We seem to struggle to accept our interdependence and utilize group interaction to support the self-illusion to serve our own perceived interests. Our attachment to this arising illusory self is part of the understanding and experience of Dependent Arising (patica samuppada).

According to Buddhist discourse, the not-understanding of the Dependent Arising is the root of all suffering of all beings. It starts with ignorance of the truth that clouds the right understanding, which causes activities that are good or bad, but do not contribute to end suffering. The consciousness links past with present, followed by the mind and body, the six senses, and feelings. These five aspects are the effects of past actions and represent the passive and reactive life.

From feeling arises craving, which results in grasping and, ultimately, behaviour. Therefore, feeling is the outcome of contact between senses and objects. It leads to action that is beyond our awareness and comprehension if we do not understand and accept the true nature of the self. As such, the concept of the no-self has a complex and far-reaching consequence on psychology and the theoretical framework of therapy approaches, as many conditions of suffering are rooted in trying to attach to an elusive sense of self.