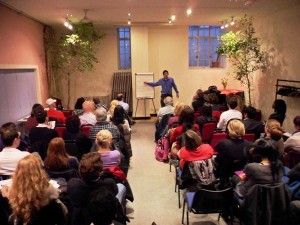 10 photos of this Meetup

At this months Event & practice session we will demonstrate the powerful NLP technique “Belief Change Cycle” which will enable you to overcome any limiting beliefs and help you to live the life of your dreams.

The event will consist of:

• How to Smash Limiting Beliefs Workshop

• Free Handouts with the structure of the technique

• A chance to then practice the technique with other students

There will be a chance to speak to the NLP Centre of Excellence team & trainers at the end of the session with any questions that you may have.

How to smash limiting beliefs and build a brighter future:Our beliefs are at the core of who we are. Beliefs guide our decisions and behavior in all areas of life. They determine what we think is or is not possible. More often than not they prove to be self-fulfilling prophecies.

Some of our beliefs are not fully our own, but rather blindly taken on from others. Once a belief is formed, we work overtime to prove it right, even if the belief is something negative like “Nobody likes me” or “I am a failure.” Do we have to let our beliefs govern us, even if they are harmful to others and ourselves? Can we consciously make changes to what we believe?

Jimmy Petruzzi will demonstrate an insight into how we form beliefs and how to smash limiting beliefs and build a brighter future. There will be a practice session held after the workshop to really master using this powerful technique! ‘Achieving World Class Results – Lesson’s from the World’s greatest performers’ With Jimmy Petruzzi

In this workshop you are going to be inspired to achieve World class results in your life by learning from some of the World’s greatest performers in both sports and business and how they did it.Success leaves clues and Jimmy Petruzzi has broken down some of the most powerful lessons that you could learn into simple and easy to understand steps so you can start applying them immediately.

Benjamin Franklin, one of the greatest leaders of all time said that you can either buy a man’s wisdom or borrow it. Buy buying it you pay full price in personal time and treasure. But by borrowing it you can capitalize on the lessons learned from the failure of others.In this workshop you will do just that. You will be inspired, energised and walk away with some clear action steps to be the best possible version of yourself that you could be.

Jimmy Petruzzi is a world-renowned performance coach and NLP, CBT and Hypnotherapy Expert. For over 15 years he has worked and continues to work with many top professional soccer teams and individuals at national and international level in the English premiership and worldwide. He also works with international and Olympic athletes, top professional sports people, and consultant to sports organisations, associations, helping them achieve peak performance in all aspects of their lives.

Over the past 15 years Jim has worked with 1000s of people world-wide, and is a sought after and highly regarded speaker for conferences and seminars internationally.Jimmy is a regular columnist for several leading publications including ‘Peak Performance’, ‘Mens’ Fitness’, and appears regularly on the television news and sports related documentaries, on radio and in the press. He won the Highly Commended Award Coaching International and Domestic work in 2006.Nominated for Britains top coach in 2008Author of Best Selling Books “Going for Gold” and “Excel at Sports, Life & Business with NLP”

“Jimmy was pivotal part of all the football programmes broadcast on Sky Sports Radio between 2006-2011. His insightful understanding and detailed analysis were integral to the success of the Football at Five show which was broadcast five times a week as well as the Live and Exclusive coverage of the 2009/10 English Premier League. Jim also played a key role in the daily World Cup show in 2010. I look forward to future collaboration with Jim in any football show I present or produce.” ANDREW PASCHALIDIS FOOTBALL PRESENTER, SKY SPORTS RADIO & RACING“Jimmy is first and foremost a really nice guy, who loves to help and empower people to reach their full potential.

His knowledge base is vast and covers a broad spectrum of disciplines in the arena of personal development, notably with regards to NLP and Hypnotherapy, where Jimmy has proven time and time again to be a Master Trainer in both modalities.
I have learned a great deal of powerful personal development techniques, which have helped me to overcome adversity in my personal life and, in turn, I have been able to help others, who needed my help to improve their quality of life; a veritable virtuous circle.
Jimmy really is the ‘creme de la creme’ of the NLP world!” Michael Smith

“Petruzzi, an Australian, is one of the best qualified coaches of his kind in the world. He has worked with several top teams including West Ham and Crystal Palace and his advanced training methods look like paying dividends on the pitch.The lads have taken to him and shown belief in his methods but his work is structured and a long-term thing.”Chris Casper, former Manchester united defender and Manager Bury FC ( Bury times)